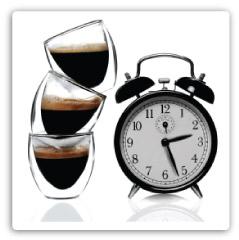 Have you ever accidently slept in till noon or later and you wake up to realize that suddenly half of your day is gone? That's about the feeling I had after returning from Hollywood, California from competing in the South West Regional Barista Competition. All of a sudden it is the middle of March and I realized my final semester of college is half over and I haven't even bought my textbooks yet. So what did I learn from this experience? Was it worth the cost? It takes a week or two to decompress after a barista competition and here is a little of what I processed in my mind after this year's regional competition.

The first thing I asked myself was what were the positive aspects of my experience? For those of you who haven't followed the USBC for multiple years, the Specialty Coffee Association of America decided to reconfigure the competition regions this past fall. The Mountain Region (of which Colorado was the center) was eliminated and Colorado and four other states were grouped into what used to be the Western Region with Hawaii and California. For competitors from Colorado, of which there were three, this meant a jump in the level of competition and a drastic elevation change to deal with. I got to sling coffee with some of the best in the business from companies like Verve, Honolulu Coffee Company, Cartel Coffee Lab, Intelligentsia, Ritual... the list goes on and on. Getting to build relationships with these people and learn from them was an invaluable experience for me and the relationships I built in California will help me to become a better barista for years to come. It was also interesting to get to be around people I had only ever read about and get to be treated like an equal. I learned that they are all just people that have dedicated their lives to their craft. The people you read about in magazines are not movie stars and they do not float on clouds; they're just cool people that would love to meet you. Lesson one learned.

Another important take away from my experience was a lesson on altitude. If you ever roast coffee at a high altitude and then brew it at a low altitude or visa versa, be advised, it will cause you problems. At the high altitude I typically brew coffee at, 5500 ft, I had decided that my espresso tasted best at 19 days out of roast. That might sound ridiculous to some, but with the extremely dry climate and the significant difference in air pressure from sea level, the process of degassing your coffee takes quite a bit longer than you would expect. From what I've found, if you roast your coffee at altitude, let your coffee degas at altitude in a sealed bag, and then take that coffee down to sea level, as soon as you open the bag the coffee will start to rapidly degas. In less than twenty four hours I found that coffee that had just started to show oils nearly doubled the amount of oils on the surface, drastically changing the flavor profiles. Intuition told me to bring multiple bags of coffee roasted on different roast dates, but it was still interesting to experience every bag performing differently than it would at altitude. No significant difference was noticed in flavor, however the crema and body of the shots as well as the brewing parameters were much different than I expected. If you go to Bogota for the WBC's, be advised. Lesson two.

The third thought I came away with is not so much a lesson as it is an observation. While competition is fun, helps you learn and generates community, it is impractical. Practicing for the competition helped me as a barista to polish my customer service skills in the presentation. It also forced me to scrutinize my technical processes with a fine tooth comb. The relationships I built were extremely beneficial and I am definitely a better barista for the experience. When you walk away from the competition though, you realize the impracticality of the setting. We use naked portafilters in my café (so no single cappuccinos) rarely am I presenting espresso as a straight shot, and we almost never use signature beverage development skills outside of the competition arena. On top of this, many of the espressos being presented in competition are near impossible to find in a café due to their highly acidic and fickle natures. While they may yield a sweet and beautifully balanced bouquet of flavors by a highly trained barista in a perfect setting, rarely does this happen in a busy café. So I suppose to sum up, I would say that I will continue to compete, and would encourage others to do the same; however, understand that the skills sets might not always matchup between a café and a competition.

In conclusion, I had a great overall experience at the SWRBC. It was a great feeling to be supported by a community of people. Having companies behind you such as Barista Pro Shop, Novo Coffee Roasters, and Everyday Joes Non-Profit Coffee House provided me with a great feeling of getting to represent the salt of the earth in a land far away. As I stated before, I would encourage any and all of you to participate in a Barista competition, as it will greatly help advance your skills in your profession. I would advise that in preparation for a competition you would take caution and see that no small detail is overlooked. And I would also like to thank you, the reader, for joining me on this adventure over the past few months. Hopefully we can meet some day and make each other really great coffee.