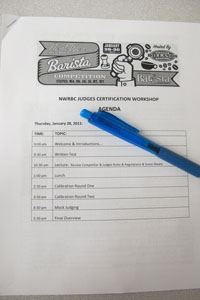 It’s been a long, coffee filled day.  The NWRBC’s judge certification workshop began at 9am this morning, and there’s no time to ease yourself into the day.  After initial introductions, you’re given a long written exam covering the USBC rules and regulations.  Today’s test consisted of multiple choice, true/false, and fill in the blank questions as well as a ‘test your memory by filling in blank sensory AND technical score sheet’ section.  It’s nerve racking.  Maybe it’s because I finished college in ’99 and haven’t taken many tests since….or maybe it’s because the rules and regulations document is 35 pages long and filled with competition minutia.  Let’s just say that I’m relieved that it’s over, and happy that I passed the written exam.

The workshop then moves into the lecture part of the day.  Head judges review important details about being a sensory and technical judge and then show the class a series of espresso and cappuccino photos to evaluate.  This usually involves some lively discussions about ‘what if’ scenarios and varying interpretations of the rules and regs.  I’m happy to report that today’s head judges kept the class moving and we didn’t spend a lot of time debating the finer, and hypothesized, points. 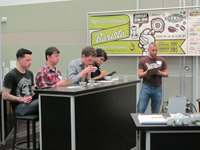 After a quick break for lunch, we’re back at it with the hands on portion of the workshop.  Hands on = tasting and visually evaluating a lot (and I mean A LOT) of drinks.  This culminates in a few rounds of mock judging and calibrating.  Every time I judge, I’m amazed at the effects excessive caffeine has on the body.  The hands on portion always goes like this (for me): feeling brain dead from half a day of testing/lecture to feeling a bit more awake after my first 2 sips of 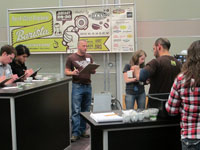 espresso to feeling pretty buzzed after the 10th or 12th to feeling a little sick to my stomach after the 15th to feeling tired again after the 20th and beyond.  That last stage is also where I find myself ruminating to other judges about the weird effects of caffeine and my theories on why it makes you feel tired (of which I won’t bore you with now).

At 6pm we finally wrapped up and were sent on our merry and highly caffeinated way.  It was a good day, but I’m glad that the workshop is over and I’m excited to get into some ‘real’ judging tomorrow!  Watch it streaming and find out more at the USBC website.