NWRBC Winner and Wrap Up

The North West Regional Barista Competition has come to a close with Samuel Purvis of Coava Coffee taking top honors, besting Ryan Wilbur of Stumptown Coffee Roasters by only .5 of a point!  Third place went to Laila Ghambari also of Stumptown .  Samuel took an interesting route with his presentation; he focused less on specific tasting notes and more on what defines ‘quality’ coffee.  His performance time was spent breaking coffee down into its structural components.  Sound intense?  As a judge of today’s finals, I can confirm that thought.  Samuel earned top honors by conveying impressive coffee knowledge, a true passion for the specialty coffee industry, and by crafting some of the weekend's best drinks.  Congratulations, Mr. Purvis! 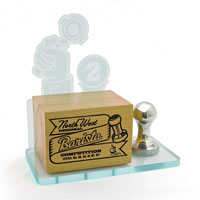 Judging the finals can be nerve racking….and awesome!  I consider myself very lucky to be given the chance to drink top notch coffees prepared by some of the country’s best baristas.  That being said, it takes a whole lot of focus (and a strong stomach) to judge the finals.  Just as today’s finalists had to bring their A game, so did the judges.  Top baristas usually have very involved and complicated performances that test your memory and multi tasking abilities (i.e. listen, smile, make eye contact, memorize look of crema and capp, write notes, remember to follow protocol for tasting, pay attention to sig bev ingredients/instructions, follow those instructions, etc. etc. etc.).  It’s on the judge’s shoulders to make assessments in a fair, unbiased, and consistent manner.  If you don’t, I can guarantee that a competitor will call you on it.

Speaking of talking to competitors, did you know that they get to ask judges questions after the competition is complete?  This can be a tense time for baristas and judges.  I speak from recent experience.  I was approached by five competitors to review scores.  Four of these reviews were pleasant and ended in some great conversations.  The other was cause of anxiety dreams last night.  I will never say that being a judge is as stressful as being a competitor (not even close!), but I also don’t discount those feelings from judging.  As one of 4 sensory judges, I am charged with assessing my own personal experience of each performance.  Four judges = potential for four totally different experiences.  The competitor that approached me was angry.  I had scored them a little lower than my counterparts and they wanted to know why.  After discussing the why’s and how come’s, they still weren’t sold on my reasoning and the interaction ended on a less than positive note.  I stand by my scoring, but it’s still hard to deal with a negative encounter like this when you feel like you did the best that you could…..just like the competitor thought they had given the best they could give.  I’m taking it as a learning experience and opportunity for personal growth.  I hope that after having time to marinate on their scores, this barista will also see the opportunity for positive change.

So, as I sit on the plane (I missed my first flight and would like to send out a big “THANK YOU” to Alaskan Airlines for booking me on one of their flights using my United ticket – awesome!) sipping a ginger ale to comfort my used and abused stomach, I find myself sighing in relief.  I’ve got another competition (and final) under my judge belt.  I’m mentally and physically exhausted.  I’m happy to have seen many old friends and made some new.  I’m excited for the start of another competition season.  I’m feeling inspired and proud to be part of this industry.  Finally, I’m looking forward to getting home and sharing my renewed enthusiasm with my BPS friends, customers, and local community.  See you next month in Chicago!