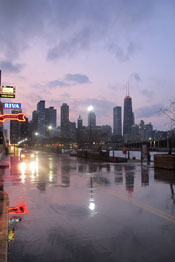 My head and stomach are still reeling from Coffee Fest Chicago.  I judged the North Central Regional Barista Competition that started on Fri and wrapped up Sun afternoon.  I’m proud to say that I was chosen to judge the finals again – hooray!  I know I’ve said it before, but I have to say again that I find myself very lucky to be given the chance to taste some of the best coffee in the country prepared by amazing baristas.  I’m continually blown away by the dedication and skill these baristas possess.  That being said, my stomach is not as happy about the situation….especially after a high percentage of very acidic signature beverages.  It’s a good thing there was a lot of good food to be had in the windy city to soak up all that coffee (see restaurant notes at bottom)!

How about a quick wrap up of the show and competitions:

-          The tradeshow was well attended.  Folks were treated to samples of everything from coffee to pastries to smoothies to oatmeal to energy bars to chocolates and more.

-          We were happy to run into quite a few old friends and had some great chats about new things to come for BPS.

-          Chicago: we started our stay enjoying beautiful sunny weather (great for walking and exploring) and left in a winter storm down pour.  Also, it really is windy there.  Really.

-          Single origin espressos have been all the rage at recent competitions, but slowly and surely the blend has been making a reappearance.  Look for one in a competition near you!

-          Friendly peeps.  We had great service and experiences in Chicago.  Thanks for the hospitality!

I thought I’d add a few notes about our dining experiences this time, since I seem to find myself exploring cities in search of interesting and great food.

1.       Publican – If you like beer and pig, you should go here.  This place had a great communal set up and it was hoppin’ in there!  The beer list is long with hard to find and interesting options.  We had blood sausage, a charcuterie plate, and a great cup of 7 year old pu-erh tea with dessert. 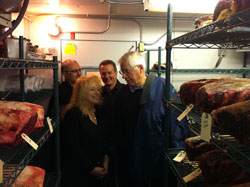 sides (soy/ginger sautéed asparagus, mac-n-cheese, mashed potatoes, sautéed mushrooms, etc.) were ok.  The wine list is great.  The highlight of the evening was a tour of the salt room (aging room, see pic of Jon and our friends from Kerry).

4.       The Public House – Beer.  The main reason to go.  Flights of 5oz tasters were $9 for 3, and they had many beers on tap to choose from.  The bottle selection was good too.  They blend and grind their own hamburger.  The fried cheese curds were interesting, but the regular fries were pretty bad.

5.       Grahamwich – We had pastrami and gruyere croissant sandwich and a coffee for breakfast here….and wish we’d had more time to check out their lunch sandwiches!  Two words: truffle popcorn.  The coffee was made using the Xpress Lid (used to brew French press in paper to go cups) and was really good (roasted by Metropolis).  Coffee was free with purchase of breakfast sandwich....nice.

6.       Gage – a newer restaurant in the Millenium Park area.  Menu had a nice price range for entrees.  Not to be missed is the Scotch Egg (a hardboiled egg surrounded by sausage, breaded, and fried – it sounds weird, but trust us!).

7.       Gibson’s Bar and Steakhouse (in Rosemount) – If you get delayed at O’hare like Jay and Jon did, then go here.  The service was awesome and steaks were tasty (though obscenely huge).