A story of a community supported barista

If you’re a follower of the United States Barista Competition (or of this blog), then you’re probably aware of the restructuring that took place for the 2011 season.  Ten regions were combined down to 6 and entry fees for competitors were increased (from $50 to $150 BGA member, $195 SCAA member, or $300 non-member).  Although there has been some grumbling about fee increases and certain states getting the cold shoulder (Colorado, for example, had become the unofficial hub of the now retired Mountain Region, but is now part of the South West Region, which includes the ‘big gun’ of CA), I think that most folks would agree that changes needed to be made.  The Specialty Coffee Association of America estimated that the cost of competitions was averaging around $500/competitor, and that cost is sure to increase as the events become more popular and more involved to put on.  Where does that leave your neighborhood barista who lives far from the competition venue and depends upon tips to make a living?  Enter Josh Taves and the community. 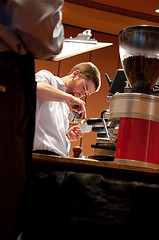 Josh Taves was a competitor in the 2010 Mountain Regional Barista Competition and missed making it into the final by 10 points.  Josh is a volunteer barista at Everyday Joe’s (a non-profit café in Fort Collins), works as head barista at Little Bird Bakery, has his own consulting business on the side (Northern Colorado Barista Training), and attends CSU full time.  Take it from me; this guy is passionate about coffee.  Too bad passion alone won’t pay for a trip to Hollywood, CA to compete in the SWRBC.  Here’s where the community part steps in.  The fine crew at Everyday Joe’s made it their mission to send Josh to CA, and enthusiastically stepped up as his sponsor.

Joe’s (as it’s lovingly called) proceeded to:  lend their store and espresso machine for after hours practice, pay the entry fee, promote ‘the cause’ via social media sites, work with their roaster to donate coffee, involve and educate the general public about Josh’s goal, and recruit the help of other coffee industry peeps in the area (including Barista Pro Shop).  This is just one example of a localized coffee community stepping up to support a barista on their path to competition; I’m sure there are others across the country.  My thought is that these incidents will become more widespread as the new USBC structure sets in as reality, and I think it’s just what the specialty coffee industry doctor ordered.  The competitions should serve as a way of designating the best of the best baristas and a worthy ambassador, but in doing so should also act as a vehicle for educating communities about coffee excellence, professionalism, and passion.

Everyday Joe’s did a great job of including the community, not just treating them as spectators.  There really was an emphasis on involving everyone and getting people to take ownership of Josh’s trek to the SWRBC .  For example, I and several others served as judges for Josh’s mock presentations.  The last of these was done on Sunday morning, and I’m happy to report that Josh (rocking a brown shirt and red suspenders) has come a long way!  It’s personally been an awesome experience to watch his routine take shape and become increasingly polished.  I for one feel emotionally invested in Josh’s pursuit of the SWRBC championship and give much kudos and thanks to Mr. Taves and the folks at Everyday Joe’s for including me and others in the community in their efforts.  Good luck and have fun, Josh!