My judging load was lighter on Thursday, so I was able to get on to the trade show floor before opening day on Friday.  I usually find that I have quality and less rushed conversations with friends, sales reps, etc. if I catch them the day before the show starts; before everyone else is vying for their attention.  Also, The Event is a BIG show.  There are a lot of people and products to see.  Personally, I can start to feel overwhelmed if I spend too much time on the floor (so many people, products, movement, lights, and booths….aaaaaaah!).  I was also able to catch a few baristas compete from the spectator vantage point, which is always enjoyable.

That evening we ate at Hugo’s, a self-proclaimed authentic Mexican restaurant.  We tried the tequila/mezcal taster flight and a specialty margarita with muddled kiwi to go with our small plate appetizers.  Apps were tasty….and interesting:  Pulpo al Carbón (octopus w/ onions and peppers served with chipotle tomatilla sauce and fresh made blue corn tortillas), Lechón (achiote rubbed suckling pig with crispy skin served with habanero salsa and fresh corn tortillas), and Chapulines (pan sautéed grasshoppers served with guacamole, chipotle tomatilla sauce, and fresh corn tortillas).  You read that correctly; grasshoppers.  Let me set this up by saying that I am not a fan of grasshoppers (alive or dead), and I was a little nervous to try eating them in taco form.  After the first very crunchy bite, a little head complete with antennae was peeking out of the tortilla at me.  I almost stopped there, but I’m a fairly adventuresome eater and decided not to let the little buggers

get the best of me.  The flavor was smoky, slightly nutty, and not bad.  The crunchiness and feeling of antennas and legs in your mouth, however, was a little off putting.  I did not go back for a second Chapulines, but I’m happy to say I tried it.  We shared the Barbacoa (lamb marinated in chiles, onion, and avocado leaves, then slow roasted in agave skin and served with onions, cilantro, and fresh tortillas).  Yum!  We finished it up with cream filled churros served with rich and creamy drinking chocolate for dipping.  It’s a good thing we did a lot of walking in Houston! 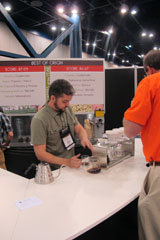 Did I mention walking?  Welcome to Day 4 aka Get Your Walk On Friday.  First, it was over to the convention center for USBC judge calibration (we evaluate a couple of espressos and capps made by the fine volunteers at the Barista Guild of America’s Café to make sure we’re in synch).  After running into friends from Everyday Joe’s (Fort Collins, CO) brewing samples of some of the coffees of the year and having a couple of quick chats here and there, it was back to the downtown area for a meeting with Jay and Jon Weller (always fun talking shop with the two of them, and I don’t say that just because Jay’s my boss :).  That meeting flew by and I soon found myself back at the convention center and prepping to judge seven competitors.  As always, I experienced the usual bout of nerves before judging, which I’ve come to welcome.  A wise head judge once told me that if you’re not nervous, there must be something wrong.

A quick note on competition trends:  I tasted a lot of Colombian coffee.  I was told to drink my entire espresso (rather than the two sips that’s required by judge protocol) several times.  Signature Beverage became Signature Beverage(s) in many performances.  Pineapple.  I think I only had two (maybe 3?) drinks with pineapple, but that’s enough to be called a trend for me.  Great music, which is always kind of a trend (I would love to have a competition compilation disk).

Semi-finalists were announced at the end of competition day 2.  After the announcement we hustled over to Lucky Strike to bowl a few frames and try out a couple of Torani/Red Bull cocktails.  From there it was on to dinner with our Monin friends at Sambuca (complete with Monin inspired cocktails).  I should mention that we got lost several times between Lucky Strike and Sambuca, which resulted in 20 blocks of extra walking.  We had a fun conversation with a very cool couple from Orleans Coffee Exchange.  Even though we were shouting over the very loud cover band, much merriment was had by all.

I apologize for the delay in posting Part 2.  This time I won’t promise a post tomorrow, but I will say coming very soon: Feast, Anvil, and “I’m judging the USBC finals!?!?!?”.