Happy National Coffee Day Give Away! 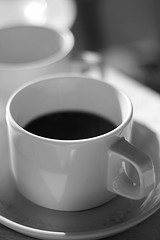 All hail the mighty little bean on National Coffee Day!  We know you feel it too….that love, and perhaps slight addiction, for one of the world’s most complex beverages (to call it a mere beverage seems almost sacrilege!).   To honor the day, we’re giving away a coffee inspired gift pack on our facebook page.  So, head on over there and check it out!

Did you know that 400,000,000 cups of coffee are consumed each day in the United States?  Yes.  You read that right.  That’s a lot of zeros!  BPS peeps Jay, John, and I were among those given the opportunity to pre-screen CNBC’s new movie “The Coffee Addiction” at Coffee Fest Seattle last weekend.  It’s an interesting little movie about the U.S. coffee industry, including astounding facts like the one above.  If you look close, you’ll catch a glimpse of yours truly judging the USBC finals in the first 15 minutes of the movie.  The movie premieres tonight on CNBC at 9pm, 10pm, 12am, 1am (Eastern Time).

Here’s to coffee and to all the folks who make it great!