* This was a BPS meeting heavy day.  Jay, Jon, and I met for most of the day.  We walked over to the convention center to watch the sneak peak of CNBC’s new movie “The Coffee Addiction”.  I was astounded by the figure of 400 million cups of coffee are drank per day in the U.S.  I was also a little surprised to see myself briefly in the film (clips of the United States Barista Championship finals…Hey! There I am judging!).

Learn more about Caffeine Addiction & The Symptoms of Caffeine Withdrawl. 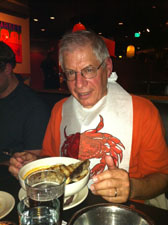 * Etta’s – We had great conversations with our friends from Big Train at dinner, but thought the food was just ok (especially for the price).

* White Horse Trading Company in Post Alley.  Bill and I found this little gem just before moving back to CO.  White Horse is an old school, old English style bar.  It’s small and cozy with eclectic décor.  The menu is limited and Joe (the owner) only accepts cash, which he keeps in an interesting wooden box.

Sunday – All of my scheduled meetings wrapped up on Saturday, so Sunday was my day to leisurely walk the show.

* I tried the new Monin Pie Flavors, and was surprised at how tasty and ‘pie-y’ they were.  Monin won one of Coffee Fest’s Best Of’s with them.

* Paper out of coffee burlap bags.  An interesting full circle product made from those pesky green bean burlap bags that seem to multiply at roasting facilities.  The paper made from the bags can be used to make roasted coffee bags.  I like!

*FoamAroma to go lid.  I have to say I was skeptical of this product at first, but after talking to the guy who came up with the idea I find myself almost sold on it.  It’s hard to explain, but the design of the lid prevents/minimizes a few things:  foam from shooting out of the hole of the cup if too full, spills in the car, and the ‘sippy cup feel’ of regular lids.  Email me if you want to learn more.

* Cocktail hour….again.  This time we made our way over to Tavern Law on Capitol Hill.  The design and décor were awesome, but unfortunately the service and drinks were subpar.  The experience was made better by conversations with new friends (Anastasia from Unic) and old (Josh and Lindsay – Josh was an old high school friend.  He loves beer, so we gave him some homebrew).  Conversation was so good in fact, that we missed our reservation at Spinasse.  I think we’re doomed never to go here, as our last 3 attempts have failed.

* It was late, but we were hungry.  We tried Quinn’s (a great little gastro pub that I highly recommend), but they had stopped serving food.  They recommended a place called the Tin Table.  Truffle fries!  Yum!  Sazerac!  Yum!  Manhattan!  Yum!  This was a great find!  Oddly enough we used to live just down the street, play tennis directly across the street, and often thought we would go to the dance studio across the hall to practice our Fox Trot and Salsa never knowing that Tin Table was there. 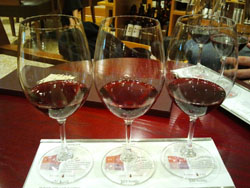 Monday – We had an early evening flight, so we had some time to kick around the city.

* Bring on the bacon spread!  We hiked a mile uphill to eat at the Skillet Diner….and, we’re glad we did!  This was one of the best meals we had in Seattle on this trip.  We shared the cornmeal waffles with pork belly (we’re suckers for pork belly!) and the skillet scramble of the day (eggs, fresh greens/herbs, olives, small chunks of some kind of pork wonder, feta, etc).The scramble was delightful!Also, buy a can of their bacon spread for the road.

* From there we walked around Capitol Hill for a couple of hours.  We stumbled upon the Melrose Market featuring local/sustainable products (I wanted one of everything) that we will definitely return to next time.

* If you’re waiting for a flight at SeaTac, you should try a flight of wine at Vino Volo.  I had the pinots, Bill had the Washington reds and we shared a small plate of cheese, salami, and nuts.  This was a surprising value for airport fare.

Back in CO, I’m still fondly remembering my Seattle trip and feeling the pangs of “I miss the PacNW!”.  However, I return with new knowledge, new projects to work on, and the usual reinvigoration for the coffee industry I feel after attending an event.  Viva Seattle!