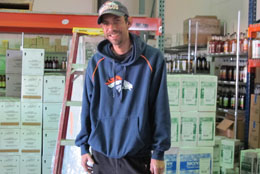 Alfred Ramos, or as all of us BPS staff call him “Big Al”, has been a huge part of the warehouse team for the past two years and before that he was a BPS delivery driver for fifteen years.  Let’s just say he’s a BPS fixture.

Al was born and raised in Denver, Colorado and as a huge sports fan he likes to keep up with the Broncos, Nuggets, AVS and Rockies when he is not working.

Al says the best part of working at BPS are the hours, the people, and the awesome owners.

His co-workers describe him as “Hard worker”  “Too awesome” and “Beware the quiet one, when you least expect it he will surprise you with his wit".

Al is always willing to help out a fellow co-worker, unless it involves sharing his hot wings or candy stash.

You can usually find Al in the warehouse sporting his Bronco wear and listening to Rap, R&B, or Classic Rock.

Al has a Jack Russell terrier named Oreo and one day hopes to live in Las Vegas “where you can do anything.”