John has been managing the Colorado BPS warehouse for almost 2 years…and he’s been doing a mighty fine job of it.  John touches just about everything coming into and leaving the warehouse.  He also played a key role in planning the warehouse layout in our new Loveland location earlier this year and is continually tweaking the placement of products to improve the overall flow.  Coworkers will tell you that he’s easy to work with, laid back, funny, reliable, and “the right hand man” – the kind of guy we couldn’t get along without. 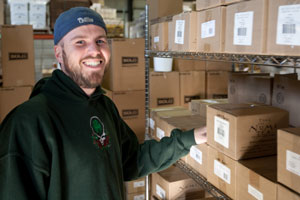 John grew up in South New Jersey in a suburb of Philadelphia.  If you’ve ever seen him, you’ve no doubt seen him sporting a Phillies cap.  John attended the University of Wyoming in Laramie (GO POKES!) and now resides in Ft. Collins with his wife Stacy and a black lab mix named Jersey (“smartest and cutest dog this side of the Mississippi”).

So what’s John up to when he’s not busy at BPS?  He loves camping, hiking, going to concerts (in the warehouse you’ll catch him listening to jam bands, classic rock and old school rap), and hanging out with family and friends.

John would like to close this with “GO EAGLES!” and “GO PHILLIES!”.